Should a Man Wear Brown Shoes to an Interview?

What is the big deal? Brown leather and black leather are … leather! Why the concern?

Dressing for success has always been a purposeful, meaningful, activity.

So when it comes to what shoes men should wear to an interview:

Some will suggest dark, polished shoes, black or brown, laces or loafers.

For others, a pair of black oxfords or cap-toed oxfords is a good choice of footwear. Get ones that don’t have super thick soles so they won’t look like boots. Boat shoes are not acceptable for business formal.

However, it has been documented that if you want a job in banking, and certainly in Britain, brown shoes simply will not do (https://thetab.com/uk/2016/09/02/wear-brown-shoes-interview-youre-not-getting-job-city-17463).

To be helpful, an informative youtube item discusses 3 factors in determining which to wear and when: https://www.youtube.com/watch?v=44CECmweCpk

1. The occasion – if very formal – one could consider a job interview formal, depending on the job level – wear black
2. Time of day – darker clothes and shoes toward evening – black – and yes, brown could work if the event has an early start,
3. Time of year – colours worn are lighter in summer, brown could work.

What is the story behind black vs brown shoes, anyway?

“If we go back in menswear history, we find that Beau Brummell (1778 – 1840) liked his black, champagne polished boots for town wear. (Others) followed his example and wore black footwear for formal occasions and in town (London). During this period, rules along the lines of “no brown in town” or “no brown after six” were very much respected, and ensured people were socially accepted.”

“By the 1950’s, the “no brown in town” rule was no longer valid, although black was still the color for evenings”. These days, brown can be worn with almost anything, except real formal attire.
https://www.gentlemansgazette.com/how-to-wear-brown-shoes-boots-men/

However Justin Trudeau, the Canadian Prime Minister, raised quite a stir when he saw fit to wear his brown shoes with a navy suit, not only to a meeting with the US President, but also to his own swearing-in ceremony https://www.who2.com/justin-trudeau-wore-brown-shoes-with-a-blue-suit-at-the-white-house/. It seems that in your 30’s to your mid to later 40’s you can wear brown shoes but past 50 you should stick to the black shoes tradition.

Other notables wearing the same were Rupert Murdoch and Jerry Hall. It does seem, “that in 2016, it’s also a choice that from a fashion standpoint looks increasingly right.”

So the take-home message for 2017 is that brown shoes are great, but will not do with a tux, in British banking circles, and probably not in a higher level, e.g. C-level, interview setting. 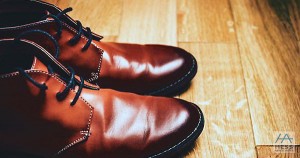